Weak institutions and natural resource abundance are a recipe for civil conflict and the overexploitation of natural resources.  In our forthcoming paper with the title “Take what you can: property rights, contestability and conflict”, Samuel Marden and I present evidence from Brazil indicating that insecure property rights are a major cause of land related conflict and a contributing factor in Amazon deforestation.

Brasil is a unique context. The contestability of property rights over land is enshrined into the Brazilian constitution. Land not in ‘productive use’ is vulnerable to invasion by squatters, who can develop the land and appeal to the government for title. This setup may cause violent conflict, between squatters and other groups claiming title to land. As such, weak property rights may distinctly affect conflict by directly and indirectly shaping the underlying incentives. 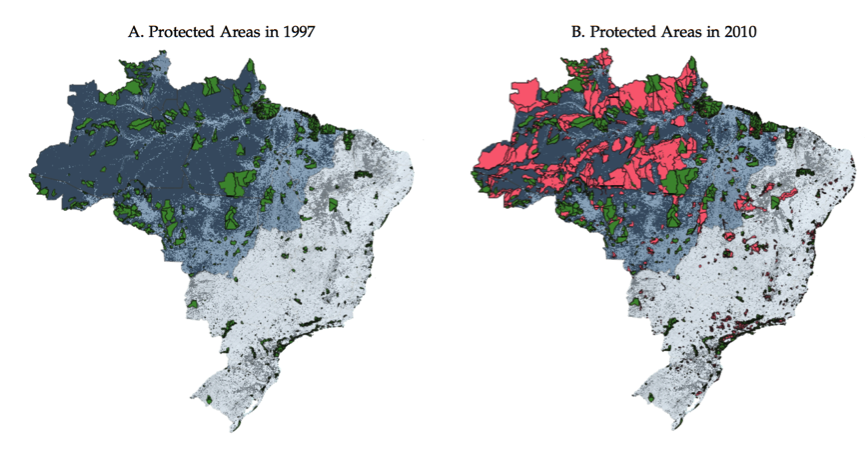 Effects on deforestation and land use change. Our empirical results on land conflict suggest that the creation of protected areas and indigenous areas, should have distinct effects on land use: since its not attractive to develop a land claim on protected land or land, where title has been given to indigenous groups, there should be limited incentives to invest in the land by deforestation.

There are two distinct channels: permanent deforestation of the type associated with cropland conversion should be dramatically reduced; temporary deforestation, such as due to illegal logging may actually increase if protection is not associated with significant increases in enforcement capacity.

Measuring deforestation and land use change. On the Amazon frontier, it is difficult to obtain reliable statistics about crop production or simple cattle ranching, as a lot of the farming is subsistence farming at small scale. Hence, official agricultural statistics are unlikely to be very useful to document changes in land use. In our paper, we invoke a very simple machine learning method to infer land use change based on k-means clustering of sequences of land use based on pixel level classifications based on MODIS land use product . We sampled roughly 800,000 randomly selected points across the Amazon and developed a pixel level panel for these points, exploring the pattern of land use. Over a five year period a sequence of land use could look like:

is indicative of permanent  land use change towards farmland, while a sequence such as

may be indicative of temporary deforestation, followed by forest regrowth. The larger the state space (i.e. the larger the individual set of land use classes), the more difficult does it become to classify individual sequences of land use. For example with 10 different states, there are 10^5  possible combinations. This is where dimensionality reduction as carried out by k-means clustering can help, by clustering or grouping sequences that are similar based on some numeric features.

While in the end, we decided to use a very simplified state space with only three states: Forest, Cropland and Shrubland the method is nevertheless instructive and useful for simple applications like this.

The separation achieved using R’s built in kmeans() function with different number of clusters with the different numeric features is illustrated below:

We can look at the individual clusters and then it is up to the researcher to decide upon how to interpret the resulting clusters. In our case, there was a clear separation into two clusters that indicate permanent deforestation as 100% of the sequences falling in that category had been classified as cropland at least once. There is an inbetween class, a class that indicates clearly temporary deforestation due to patterns of forest regrowth and a category that rests somewhere in between temporary and permanent.

Lastly, the big cluster consists of the bulk of pixels that are always forested.

Permanent vs Temporary and Forest Use

In terms of permanent and temporary deforestation, our results suggest that – while permanent deforestation goes down, temporary land use patterns actually seem to become more likely.  This could suggest that environmental protection may induce some behavioural changes at the margin, whereby settlers, rather than trying to develop legal claims over land actually just turn to extract the natural resources on the land and move on. Naturally, such behavior is much more difficult to prevent through policing and enforcement efforts.

2 thoughts on “Land Conflict, Property Rights and Deforestation in Brasil”