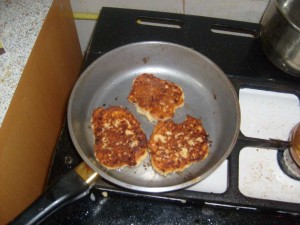 While I was in Moscow visiting Alena I also tried to learn some Russian cuisine or at least pretend to. While it seems quite difficult to get the exact type of cheese that was used to make these pancakes, they however, still taste quite delicious with sour cream and jam – right now, its plum season, so I actually eat them with plum jam.

Here I write up a recipe that is somewhat similar, however, as it appears we can not get the exact type of ingredients back home in Germany – so it requires some trying out.

And here you go. All that is left is heating the pan with some oil or butter and you are ready to go with cooking those delicious pancakes.

I also tried slight variations – such as filled ones, filled with 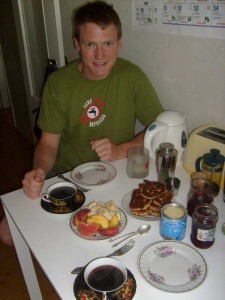 cherries (for this, the dough needs to be quite thick) or filled with blueberries. However, I also made a salty version with onions and ham, with some pepper. After some trying out, they all turned out to be delicious.

However, the traditional ones are best eaten with sour cream and some jam. Very very tasty!

Ok…here is a small update. I wrote that I tried to make salty ones. For the dough I used 250 grams of 0.2% fat quark and 200 grams of 10% fat “Schichtkäse” (its basically a Quark with less water but more fat). Then I added some salt, black pepper and onions and ham.
They turned out to be quite good. I made some meatballs and ate all together with fried Zuccini. For the Zuccini – make sure to use only little oil, as they would just suck up the fat. Then add quite a fair amount of garlic, salt, black pepper and some herbs, whatever is in the garden. 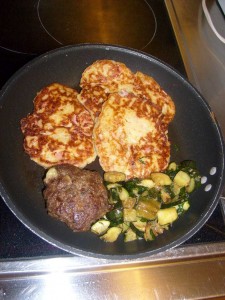